Every other week escorted tours around Iceland all year round. Explore the island of fire and ice and travel with an international group on Iceland's ring road. Discover stunning scenery and dramatic landscapes. A local expert guide helps you explore the unspoiled Icelandic countryside with volcanoes, lava fields, hot springs, mountains, fjords, glaciers and waterfalls.
Enjoy a leisurely group tour on Icelands ring road, combining nature, soft adventure, and cultural experiences. Chances to see the Northern Lights during departures from mid-September to mid-April. Join this amazing and complete circle tour of Iceland, a bestseller all year round! Hunt the Midnight Sun in the Summer and the Northern Lights in the Winter. 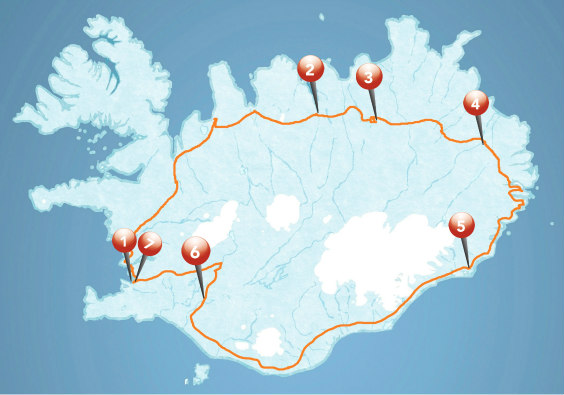 Individual transfer by Flybus shuttle bus from Keflavik airport to your accommodation in Reykjavik.

At 09:00 meet our tour guide and depart from Icelandair Hotel Natura.

 Travel west, passing the town of Borgarnes and easy hike on Grábrók volcano crater.
 Further north we stop at the turf church of Víðimýri.
 We continue along scenic fjord landscape and over several mountain passes until we reach Akureyri, the capital of North Iceland.

Overnight at Icelandair Hotel Akureyri or similar hotel.
Breakfast included. Lunch & dinner is on your own.

 Enjoy the panoramic view over Eyjafjörður fjord.
 Travel to an important spot in Iceland's history, Goðafoss, the waterfalls of the Gods.
 Lake Mývatn which is known for its geological wonders and active bird life during summer.
 Bizarre lava formations at Kálfaströnd followed by a walk around the many pseudo craters.
 Relaxing soak at Mývatn Nature Baths that contains a unique blend of minerals, silicates and geothermal micro-organisms.

Overnight at Sel Hotel Mývatn / Icelandair Hotel Mývatn or similar hotel.
Breakfast included. Lunch & dinner is on your own.

Today starts with a hike in a lava labyrinth at Dimmuborgir "the dark castles", hoping to get a glimpse of the trolls who are said to live there.

 Hot spring area of Námaskarð with bubbling mud pools and steaming solfataras.
 Uninhabited highlands and moonlike surrounding to East Iceland.
 *From June to August the tour includes a detour to Dettifoss, Europe's most powerful waterfall in the northern part of Vatnajökull National Park.

Overnight at Icelandair Hotel Hérað or Álfheimar Country Hotel.
Breakfast included. Lunch & dinner is on your own.

It's a day to admire the dramatic fjord landscape and its tiny fishing villages at the end of twisty roads in the East Fjords.

Overnight at Hotel Höfn or similar hotel.
Breakfast included. Lunch & dinner is on your own.

Please note that itinerary on this specific day can change due to seasonal factors, such as daylight.

A beautiful drive with many natural wonders awaits today.

 Jökulsárlón, a glacial lagoon filled with floating icebergs - explore the extraordinary site and if lucky you can might spot seals swimming in arctic waters. Walk on the black sandy beach where large icebergs get stranded. Depending on the season optional boat trips are available.
 You can walk on the so-called Diamond Beach, where large icebergs get stranded.
 Head across the Eldhraun lava field, cross the sandy desert of the south coast, overlooked by mountainous cliffs, glaciers and waterfalls.
 The world-famous Reynisfjara shore, near the village Vík, is widely regarded as the most impressive black sand and pebble beach in Iceland and features an amazing cliff of regular basalt columns resembling a rocky step pyramid.
 Out in the sea are the spectacularly shaped basalt sea stacks Reynisdrangar.
 Skógafoss waterfall - 60 meters high and one of the most impressive waterfalls in the country.
 Skógar folk museum
 Continue to the 60-meter high but narrow Seljalandsfoss waterfall which plunges over the mountain. There is an interesting trail that goes behind the fall  if you are prepared to get wet!

Overnight at Hotel Eyjafjallajökull / Stracta Hotel Hella or similar.
Breakfast included. Lunch & dinner is on your own.

Please note that itinerary on this specific day can change due to seasonal factors, such as daylight.

Today classics will be explored before returning to Reykjavík.

 Friðheimar - learn about the Icelandic horse, its unique qualities, and history and visit a geothermal greenhouse.
 Next is the Golden Circle
 At Geysir there are a variety of hot springs and bubbling pools. The original geyser is now dormant but has been replaced by Strokkur, "the Churn", which erupts at 5-10 minute intervals.
 Gullfoss, "the golden falls" - a double waterfall that tumbles 32 meters into the Hvítá river and attracts travelers in summer and winter.
 Þingvellir National Park - a UNESCO world heritage site, and an area of exceptional geological and historical interest. The Þingvellir area is part of a fissure zone running through Iceland, situated on the tectonic plate boundaries of the Mid-Atlantic Ridge. The faults and fissures make evident the rifting of the earth's crust.
 The tour ends with a short city tour to show highlights of the world's northernmost capital.

Overnight at Icelandair Hotel Natura or similar hotel.
Breakfast included. Lunch &dinner is on your own.

Northern Lights: From mid-September to mid-April optional Northern Lights evening tours can be booked at the lobby of your hotel, should weather conditions be favourable.

PLEASE NOTE that this tour books up quickly. An update on availability may not appear immediately at our website after the tour fills up. Kindly contact us to check for availability before making an online booking.

V.I.P. SEATING: Is an optional supplement for passengers that require more space and extra comfort on our multi-day coach tours. Passengers get two seats per person on the bus and a guaranteed window seat in the front rows of the bus, on first comes - first served basis.
V.I.P. SEATING is available in summer 2022 up on request for an additional fee.

EMPTY-SEAT: Is an optional supplement for passengers that require social distancing on the bus and more space. Passengers get two seats per person, meaning an empty seat next to them on our multi-day coach
tours.
EMPTY-SEAT is available in winter 2021 - 2022 up on request for an additional fee.

*NOTE that most double rooms in Iceland are actually twin bedded rooms. Triple rooms not available for this tour.

Note that there is limited day light, about 5-6 hours, for departures mid November to End of January. For your information the shortest day light in Iceland is on the 21st of December, about 4 hours.

NOTE: Itineraries may be subject to change at short notice during severe weather conditions and certain outdoor activities/day trips may be cancelled during the winter season in Iceland. In these rare cases, where situations of force majeure apply, excursions/activities cannot be refunded but the local guides will try their best to find reasonable alternatives where and whenever possible.

CHILDREN DISCOUNT: 20% discount for children 8-11 years of age if sharing room with parents. Tour is not recommended for children younger than eight years of age. Triple rooms are double rooms with extra bed and ideal for two adults and one child.

PAYMENT: A non refundable deposit of 20%, of the total package price should reach Iceland RoadTrip within 2 days of confirmation of booking and full payment not later than 6 weeks prior to tour departure. In case of delay on payments, Iceland RoadTrip will reserve the right to treat this as a cancellation and withdraw its confirmation of the services.
Every detail regarding the booking must be included, in order for Iceland RoadTrip to ensure efficiency, including the passengers name, flight information, all accommodation, tours and other services.

TRAVEL INSURANCE: To avoid dispute in case of cancellation, we strongly recommend that our clients purchase a comprehensive travel insurance in their home country, that covers your cost should you have to cancel your tour. This kind of travel insurance is usually not expensive and it frequently covers other risks too.

The price depends on your selection.

Send Us an Inquiry