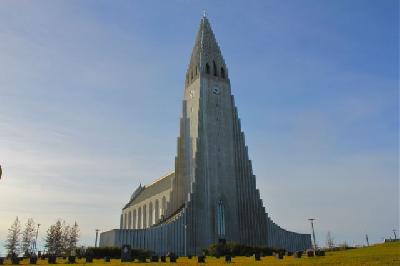 Hallgrímskirkja Lutheran Church is a well-known landmark towering over the capital. It is named after the poet and clergyman Hallgrímur Pétursson (1614-1674). It is 75 meters tall making it the largest church in Iceland. The church is designed to resemble the basalt rock formations found in several places in Iceland for example by Svartifoss waterfall in Skaftafell where you can see clearly where the inspirations came from. The architect of the church was Guðjón Samúelsson (1887 - 1950) one of Iceland's most influential architects and actually the first Icelander to be educated as an architect. Hallgrímskirkja proofed to be his last work but traveling the country you are likely to see some of his works like Akureyri Church, The national Theater, University of Iceland, Héraðskólinn school at Laugarvatn to name just a fraction.
Construction o the church started in 1945 and after 35 years, it was finally completed in 1986. The church tower offers is an amazing view of the city that should not to be missed. A short elevator trip to the top of the tower is recommended. In front of Hallgrímskirkja your will notice a statue of Leifur Eiríksson also known as Leif the Lucky who is thought to have been the first European to set foot on the North American continent, about 500 years before Columbus .
The Church is located on Skólavörðuholt hill in central Reykjavik and difficult to miss. I is actually a good reference point when traveling around Reykjavik as it can be seen from far away.