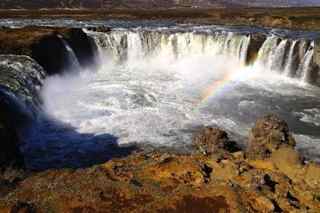 Goðafoss Waterfall is an impressive waterfall by the main highway where an historical event took place in the year 1,000 when Icelanders converted to Christianity. The story goes that a so-called law speaker named Þorkell disposed of the pagan gods by throwing them into the waterfallthus the name, Goðafoss, which means the "waterfall of the gods".